This year is the tenth anniversary of Roald Dahl Day – an event that has become a huge success here in the UK and abroad. It’s usually celebrated around the 13th September, which was Dahl’s birthday back in 1916. It’s amazing to think that had he been alive today he would have been 100!

It’s a great excuse to indulge the kids in a spot of storytelling and fancy-dress (or ‘costume’ as Americans like to call it) in order to promote reading and to raise money for charity.

Our daughters’ school chose today to be their Roald Dahl Day, and were greeted by their towering, rugby-playing headmaster with rouged cheeks wearing false breasts under a Miss Trunchbull outfit. Mildly intimidating but utterly hilarious!

Whilst our eldest daughter (9 years old) refused to be photographed as chewing gum champion Violet Beauregarde from Charlie and The Chocolate Factory, our youngest child E, who’s 7, was happy to have her picture taken. 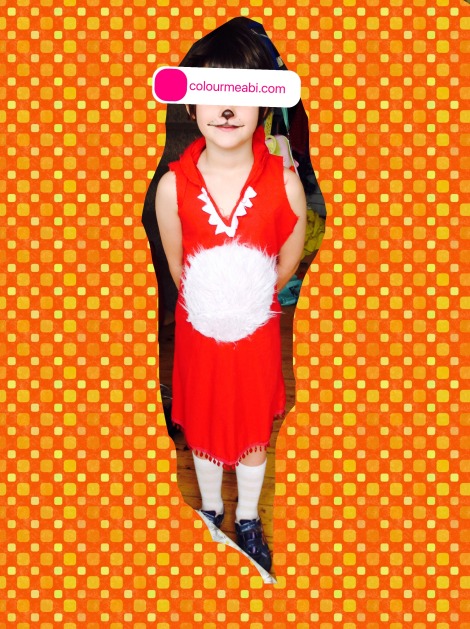 E is wearing a dress I originally ran up for the girls for the annual Brighton Children’s Parade: the theme in 2014 was ‘Commotion In The Ocean’ so the girls went as red crabs, with headbands with eyes and plenty more crustacean accessories besides! I included a hood for fun and added beads around the hem to make swishing sea-like noises.

A year later I sewed on a swingy tail and furry white tummy for a fox-related party– a friend’s 40th this time! Obviously, we’ve lost the pointy fox ears since then….

Back to Roald Dahl Day, today: unfortunately, pupils at our local school aren’t allowed to wear full-on facepaint as some of the littlest kids get scared, so instead we had to satisfy ourselves with a little liquid eyeliner on our daughter’s nose.

So, here’s E as Mrs Fox from Fantastic Mr Fox!