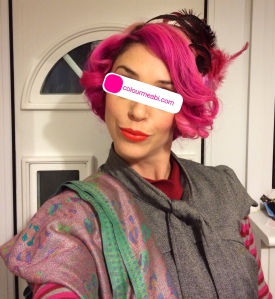 In character as Agnes Paige-Turner, a 1930s aristocrat.

This New Year’s Eve we bundled the kids in the car and drove over to some friends’ for a 1930s Murder Mystery Party. If you’ve never taken part in a Murder Mystery Party, and would like a further explanation, please scroll to the bottom of this post.

Otherwise, here I am in character as Agnes Paige-Turner. As you can see from the photo of the script below, Agnes was a rich aristocrat but dressed fairly plainly. For someone like me who had visions of 1930s screen-goddess loveliness, this was fairly devastating!

However, following one of my highly recommended faithful hair bibles Vintage Hairstyling: Retro Styles with Step-by-step Techniques and with the help of Babyliss hot rollers, cheap but functional Tesco THX curling tongs, hairspray and pins, I like to think I managed to pull it back from the edge…or at least pull my hair up from its normal place resting on my shoulders!

Clothes-wise I pulled out my only mid-length woollen skirt and capped it with a light jumper, as fitted knitwear was fairly fashionable back in the 1930s. Over this I threw an old grey-gold tweed top with a pussy bow from Topshop. Lacking the required ‘brogues’, I set it all off with some of my oldest Irregular Choice heels in dark red velvet. I also added a fascinator from Revamp my local fancy dress shop (tip – stores like these are always brilliant for sourcing goodies for themed nights out!). Yes, headgear this flighty was slightly outside the remit of Agnes’s character, but I’m sure you’ll forgive me a little bit of glam…

The lipstick I wore was Bourgeois Rouge Edition 10. I would’ve preferred to mix it with my MAC Ruby Woo lippy to get a darker shade to match the jumper and shoes, but unfortunately I couldn’t find it in the rush to leave the house for the party. Oops!

In character as Agnes Paige-Turner, a 1930s aristocrat.

From my experience, this is how A Murder Mystery party works:

All guests are assigned a character from a story and sent the script for that role in advance (you can see my script above). Guests are expected to dress like their namesakes and expected to stay (not strictly though, obviously!) ‘in character’ for a given part of the evening – for us, this meant during dinner.

Halfway through the meal each of us was randomly dealt a card which told us whether or not we were to be the Murderer for the evening. This was to remain a secret.

We then had to go round the table, each of us answering three questions about the motives our characters had for murdering the victim. Ultimately, despite every character present having a reason to have killed the victim, we had to guess who the Murderer was from their answers, and from their general behaviour during the course of the meal.

Our Murderer for the evening was a great actress and very hard to detect. But I was one of three people to guess correctly – woohoo for me!